Among the many cutaneous conditions known to mankind, Terry’s Nails is one that could be a simple sign of aging, or could be indicative of deeper health issues. It’s important to stay on top of such possibilities, so here’s what you need to know about nail abnormalities condition.

In Terrys Nails, the finger or toenails take on a stark white appearance with a dark band generally appearing near the ends of the nails: 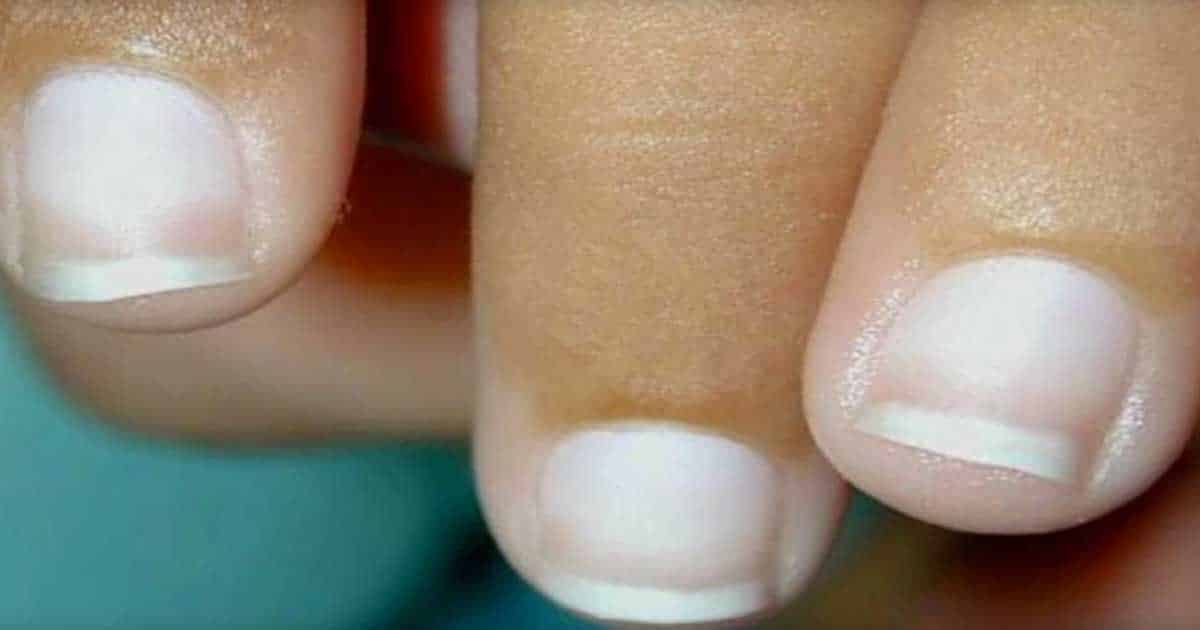 The condition was first described by Dr. Richard Terry in 1954, hence the name. He found it in association with patients who also had hepatic cirrhosis. His original description of the ailment was:

“[A] white nail bed showing ground-glass opacity not affected by venous congestion and indistinguishable from the lunula with a 1–2 mm distal band of normal pink.”

This description was later revised in 1984, adding that:

“The distal band width may be between 0.5 mm and 3 mm, can be brown in color and the proximal nail bed can be light pink.”

On the surface, it appears to be a simple cosmetic condition. This could be the case in some instances, but Terry’s Nails is also linked with more serious diseases, hence the need to see a physician upon noticing the condition to determine the cause.

How Does Terry’s Nails Develop? Is It Treatable?

As mentioned, Terry’s Nails could just be a sign of aging in some. In instances where it is not, though, it is associated with a number of systemic diseases.

The pathogenesis, or manner in which the condition develops, is not completely understood. One possibility is that vascular changes in the nail bed can cause the appearance to change, but more study is required on this front.

What doctors do know, however, are the myriad associated diseases and how they can affect the body. By knowing the underlying cause, a doctor can then formulate a treatment plan:

This was the condition that Dr. Terry first associated with the development of Terry’s nails. Cirrhosis occurs when healthy liver tissue is slowly replaced with scar tissue. This results in the liver becoming incapable of performing its normal functions of:

There are three main causes of cirrhosis (liver disease):

Realistically, though, anything that causes damage to the liver can in turn spur on cirrhosis. Heart failure, diseases, bile duct blockages, and more have been implicated in the initial onset of cirrhosis in many patients.

There are other symptoms that will present in addition to Terry’s Nails in an individual with cirrhosis, including a loss of appetite and energy, sudden changes in weight, jaundice, discolored urine and stool, and personality changes, among others.

Cirrhosis, unfortunately, is incurable. There are, however, treatments that can slow its progression and minimize symptoms.

Limiting alcohol is a large factor. Those with hepatitis can take steroids and anti-viral drugs to combat the damage to liver cells. Individuals with autoimmune related cirrhosis must treat the specific disorder to counteract the effects on the liver.

In some cases, doctors will prescribe medication to treat the symptoms. These might be diuretics to remove excess fluid buildup, and could be supplemented with dietary alterations.

Severe cirrhosis might necessitate a liver transplant, which opens up a whole new box of complications and possibilities.

What Your Nails Reveal about Your Health

Most know of this life-threatening ailment. Insulin resistance in the cells causes sugar levels to build up in the blood, leading to numerous health problems. There is no single cause for type 2 diabetes, rather, a combination of several factors.

Genetics play a large role, with DNA having a great influence over how your body creates and uses insulin. Being overweight can compound a genetic predisposition, causing a greater degree of insulin resistance.

Other factors that could play a part are a breakdown of communication between cells, excess liver glucose, and certain metabolic syndromes.

In additions to Terry’s Nails, other symptoms will be present, most notably:

Treatments for diabetes center around controlling the condition. Doctors will advise patients to get more exercise, watch what they eat, and may prescribe medications that can counteract the effects of excess sugar in the blood.

The heart hasn’t stopped completely, but its ability to pump blood is severely diminished, and the body’s nutrient needs will not be met. This, in turn, causes changes in the kidneys, water retention, and a “congestion” of the body.

This form of heart failure is caused by several separate conditions. Blocked or narrowed arteries can starve the heart of nutrients, diminishing its capacity. Heart attacks too can cause a sudden blockage or damage the heart’s musculature, resulting in reduced performance.

Any condition that causes the heart to work more than it needs to, like thyroid disease, kidney disease, or high blood pressure, will have a similar effect. Any one or a combination of these factors can put one at risk for varying degrees of heart failure.

Doctors can use Terry’s Nails as a possible indicator that something is wrong. If it is heart failure, they will notice other symptoms, like congested lungs with a severe backup in fluid and a persistent cough.

Fluid retention will take place in multiple areas of the body, including the ankles, legs, and abdomen. The doctor may notice weight gain in patients as well. Because of the increase in fluid, patients may need to urinate more during the night.

Heart failure will cause irregular heartbeats, and the lack of blood to organs in muscles will cause a sufferer to feel tired, weak, or dizzy.

To treat heart failure, doctors will look at specific symptoms and underlying causes to determine the stage of heart failure and individual might be experiencing. From there, they can recommend appropriate treatments to counteract the problem.

Some basics include not smoking, drinking, or doing drugs. They will advise patients to combat conditions that could be exacerbating heart failure, like a lipid disorder or high blood pressure. Exercise, weight loss, and proper diet will also play a large part in many treatment plans.

More commonly known as chronic kidney disease. The kidney gradually loses its ability to filter wasted and fluid from the body, causing a gradual build-up that can lead to other complications.

Because symptoms are often slight to begin with, Terry’s Nails can sometimes tip a physician off that something is amiss, causing them to investigate further. When other symptoms occur, they are generally non-specific, and easy to confuse with another condition:

Because of this, doctors will need to perform additional tests and procedures to determine if kidney failure is indeed the culprit. These could take the form of blood tests, urine tests, or taking a kidney tissue sample for analysis.

There are underlying conditions that can initiate chronic kidney disease, including diabetes, infections, cancers, iron-deficiency anemia and obstructions in certain parts of the body. If one smokes or is obese, the risk of kidney disease increases.

Treatment options will vary depending on the cause of kidney disease, but will also include methods to control the symptoms associated with the condition. A doctor may prescribe medication to treat: iron-deficiency anaemia, cholesterol levels, and high blood pressure. They may also recommend dietary changes.

In severe instances, dialysis or a kidney transplant may become the only options, though these are far from ideal solutions.

This is a condition of the arteries characterized by a build-up of fatty material within the blood vessels. The arteries become blocked, narrowed, and weakened, reducing the supply of blood to parts of the body. In turn, sufferers may experience pain, cold limbs, and other symptoms.

Peripheral Vascular Disease can be treated and even prevented with appropriate lifestyle changes. These include most of what you would expect: controlling blood pressure, eliminating alcohol and smoking from the routine, watching what you eat, and exercising more often.

There are a few other conditions associated with Terry’s Nails, including peritoneal dialysis, hemodialysis, and HIV. As with all others, you should consult a doctor to discern the true cause.

Don’t Confuse This With…

There are a few other conditions one may confuse for Terry’s Nails. The following are sometimes similar in appearance, but distinct enough for a skilled physician to differentiate.

Also known as half-and-half nails, these are characterized by a proximal portion of white nails (transverse leukonychia), and a distal portion that is red, pink, or brown. There will be a stark contrast between the two halves, hence the name. This condition is most often seen in hemodialysis and renal transplant patients.

The exact reasoning behind the condition is unknown, though, like Terry’s Nails, some believe it is caused by vascular changes in the nail plate. This condition is also associated with Crohn’s disease, Kawasaki’s disease, Behcet’s disease, cirrhosis, hyperthyroidism, HIV, and several others.

Fungal nail infection more commonly known as nail fungus can cause the nail to turn white, like one would see in Terry’s Nails. However the discoloration in this fungal infection usually occurs on the nail itself and not the underlying nail bed.

When the nail separates from the nail bed, it can become discolored. This is generally caused by trauma, infection or a host of other conditions. Unlike in Terry’s Nails, the whitened area is more likely to appear near the end of the nail, with the base appearing more normal.

Also known as nail cancer, subungual melanoma also causes discolored nails. However, this condition is a lot worse as the nail beds ulcerate and bleed. The nail also extends to the adjacent nail fold.