Our body has its own “language”, and whenever something is wrong, it makes sure to send us various signals.

Some of these signals are rather obvious, such as pain or fever. Others are very subtle like a slight change in the texture, appearance and color of our fingernails.

The latter often tends to go unnoticed until it is too late.

Fingernails can reveal some of the most dreaded diseases, some of which can be fatal if these health problems are not diagnosed in the beginning stages. 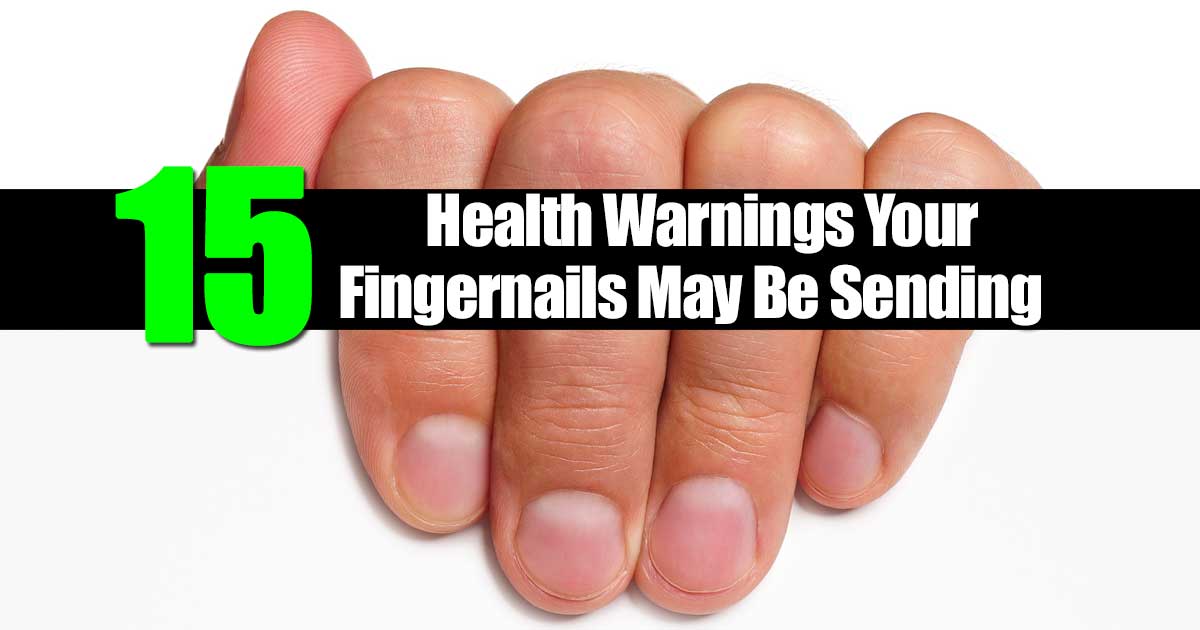 This is why it is crucial to keep an eye on your nails and pay attention to even the slightest change.

Most adults have seen toenail fungus, however, look at the ridge lines, dips, grooves as well as the curves that may occur on fingernails.

Do not forget to check out whether your nails have become thicker or thinner than usual. If your nails have suddenly started to change, touch base with your health care provider.

They may run a series of tests to determine if there is anything to be concerned about.

Having revealed the relation between fingernails and disease, below you will find 15 of the most important warning signs your fingernails may be sending.

1. Redness Around The Nails

If you notice your nail bed has turned red rather than pinkish white as what a healthy fingernail should be, this might indicate a severe heart disease that could lead to congestive heart failure.

Although this is only one of the possible explanations for the sudden color shift, there are tens of other potential culprits behind it.

On the other hand, if you see the redness has extended to the cuticles and sides of your nails, this might indicate Lupus. [source]

It is one of the most common autoimmune diseases that triggers an abnormal immune system response, making your body attack itself.

Fortunately, even if it turns out that Lupus is the cause of that bothersome redness in your nails, you can easily keep this condition under control, with the right treatments.

Terry’s Nails is an informal name given to unusually white nails. If you noticed your nails turned white or having white spots for no apparent reason, there are usually two explanations.

One, your nails have started to detach from the nail bed and the blood supply was either partially or completely interrupted (which, one again, might be the sign of a more serious condition). It can be due to lack of folic acid and other important minerals needed by the bloodstream.

Two, you have developed a fungal nail infection.

If you suspect that you might be suffering from this condition, take a look at your fingernail tips to see whether they are reddened or dark.

Aside from the fact that Terry’s Nails can be a very unsightly condition that impacts one’s self-esteem, it can also indicate a series of dangerous conditions:

On the other hand, it is not uncommon for cancer patients who have been subjected to extended chemotherapy treatments to develop Terry’s Nails at a certain point.

Have you noticed that your fingernails became a lot thicker than they used to be, or that they grow at a faster pace than they normally do?

This might actually be the direct result of a serious fungal nail infection. This often leads not only to the extreme thickening of the nails, but also to their discoloration.

Some of the most common culprits behind overgrown and thick fingernails include arthritis or psoriasis. However, check with your health care provider for an accurate diagnosis. [source]

4. Nails Detached From The Nail Bed

If your nails have started to detach themselves from the nail plate and this is not the result of trauma or pressure, this might indicate a hormonal imbalance in your body.

As a matter of fact, separated nails are often indicative of hyperthyroidism. This common condition occurs when your thyroid gland is releasing more hormones into your bloodstream than it is supposed to.

If this is the case, then your doctor might recommend several natural treatments to help you manage or even reverse your hyperthyroidism. [source]

5. Dark Vertical Stripes Along The Nail

This is one of the most obvious and dangerous warning signals your fingernails can send, and the medical term for this condition is actually “linear melanochia”.

Unfortunately, many people choose to overlook these dark stripes that emerge along their nails. Why… because it does not cause them any pain.

But this can actually indicate a form of skin cancer that affects only the nail bed, known as “Subungual Melanoma.”

Melanoma is known to be the most aggressive type of skin cancer, and the sooner it is diagnosed, the easier it is to cure it. [source]

If your nails suddenly turned purple or blue, then this may be indicative of hypoxia (lack of oxygen), which is often triggered by an impaired circulation to your peripheral areas (your feet, hands, ears and such).

Most of the time, blue or purple nails do not indicate any serious health challenges. This minor blood circulation problem can be easily reversed with natural remedies.

7. Small Depressions Or Dents On The Surface Of The Nails

Have you noticed some small depressions/dents on your nails, and you do not remember seeing them there before?

If so, then these small dents or nail pitting might indicate reactive arthritis (a serious type of arthritis that is somewhat similar to Lupus to a certain extent, and that occurs when your immune system starts to attack the joints), psoriasis, or eczema.

Statistically speaking, approximately half of the individuals who suffer from psoriasis also have small dents, pitted nails or depressions along their nails, this is why it is highly recommended to see a dermatologist.

Nails can easily become discolored and they can shift their color from a natural, healthy pink to black, yellow, grey, brown or even green, and it is essential to know what each color stands for.

For instance, if your nails have slowly started to turn green, this might indicate nail psoriasis or a severe fungal nail infection, although it can also indicate jaundice, tuberculosis, sinusitis, lyphoedema or even chronic paronychia, which is an infection that affects your nail fold.

On the other hand, grey nails are usually triggered by various prescription drugs such as antimalaria medications, whereas brown nails may indicate chronic malnutrition or even thyroid disease (either hypothyroidism or hyperthyroidism).

If you notice that your nails have two distinct colors, however (for instance, they may be half brown and half white). This might indicate liver failure, which is known to trigger changes in the natural melanin production (melanin being the hormone responsible for skin pigmentation).

Almost 50% of those who suffer from kidney failure reported having this nail condition.

Medically known as “Koilonychia”, this is a condition that occurs when your nails are excessively soft and look scooped out, similar to the shape of a spoon.

There are two health conditions commonly associated with spoon-shaped nails. Hemochromatosis, which is a liver disorder that causes your body to absorb too much iron, and hypothyroidism.

However, spoon nails may also indicate other severe conditions that should not be ignored, ranging all the way from heart disease and anemia to an impaired blood flow to your nails or even a form of Lupus known as “Lupus Erythematosus.” [source]

This is by far one of the most common nail conditions. It has happened to almost all of us at least once.

Healthy nails may crumble or to become thin, frail and brittle. This usually indicates a lack of vitamins (typically Vitamin B7). This can be easily resolved by taking a multivitamin supplement.

However, if your nails are still crumbly and brittle after you have taken supplements, you might want to run some in-depth medical tests.

In rare cases, lichen planus may be to blame for frail nails. [source]

11. White Stripes On The Nails

As mentioned above, dark-colored stripes or ridges along your nails may indicate a type of nail cancer, but what about the white stripes on the nails?

This nail condition is actually very common amongst children who do not have a balanced and nutritious diet, as it indicates protein deficiencies.

Fortunately, the white stripes tend to disappear quickly, after increasing your intake of fish, nuts, seeds, lean meats and other sources of natural and high-quality protein.

Also known as “nail clubbing”, this is a condition characterized by an unnaturally large nail bed that tends to curve around the tips of the fingers.

Clubbed nails condition is a slow and gradual process that takes place over the course of several years. It is usually triggered by hypoxia (lack of oxygen).

However, nail clubbing has also been associated with other more serious conditions, from IBS and lung disease to liver disease, cardiovascular problems and even autoimmune disorder like AIDS.

This is why it should not be neglected.

Have your nails started to become loose and they detach fairly easily from the nail bed? This often happens when you hit your fingers.

If you have not suffered any injury to the fingers or toes, the chances are that you may be suffering from:

However, in rare cases the nails tend to become loose after a severe allergic reactions to antibiotics and other products.

Most of the time the nail tends to re-attach to the nail bed as it starts to grow. Unless your nails become loose and fall, this slight detachment should cause no concern.

We discussed what blue or white nails might indicate, but what about white nails accompanied by a blue nail base?

This is often the sign of a lack of nutrients, such as iron deficiency.

Nails become very white and also gives the nail base a blue or, in some cases, even a purple color.

This nail condition might indicate a problem with your liver or your pancreas. At the same time, it is also very common amongst those who suffer from Diabetes in the incipient stage.

It also occurs when your body becomes unable to properly process and metabolize sugars (which is usually the result of an insulin deficiency that is commonly linked to type II diabetes).

Yellow is often associated with an unpleasant fungal infection, and for a good reason.

If your fingernails or toenails have slowly started to get a yellow hue. You might want to try some anti fungal tablets or topical ointments.

A natural method could use some essential oils – tea tree oil – being the most commonly used one, in this situation.

However, if you have tried various natural treatments for your potential fungal nail infection and none of them actually worked, your yellow nails may not indicate a fungal infection after all.

They may also indicate a serious lung problem, such as the accumulation of fluid around the pleurae (the thin membrane that surrounds your lungs) or emphysema, neither of which should be overlooked.

Some rheumatoid arthritis patients find themselves with yellow fingernails when with  being treated with thiol drugs. [source]

To sum it all up, these are 15 of the most common health warnings fingernails are trying to send you.

It is important never to try and diagnose yourself based solely on the aspect of your nails: regardless of how sure you are that you might be suffering from one condition on another.

Only a professional and certified doctor can help you get a precise diagnose, based both on your physical symptoms and your blood tests.

Most of the time, these slight changes in the texture or color of your nails indicate a small vitamin deficiency.

Other times they can also hide potentially life-threatening conditions that can have devastating effects, when not treated correctly.