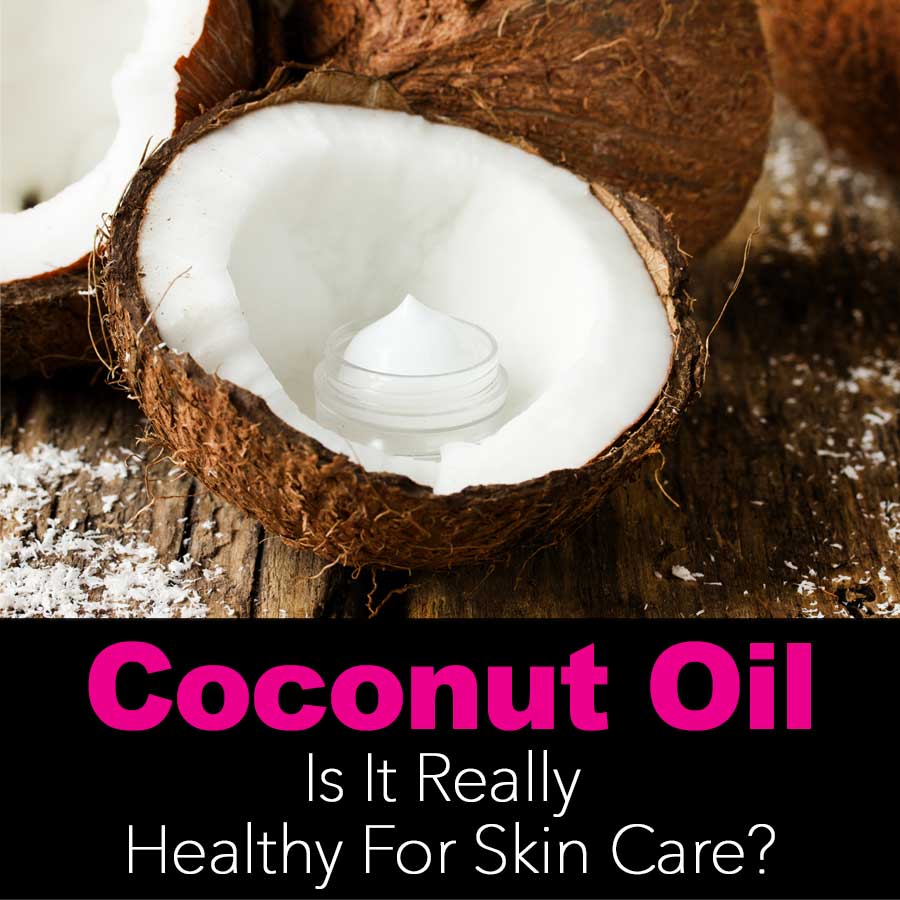 If you’ve paid attention to the internet for even a bit over the last few years, you might have heard a thing or two about Coconut oil. From cooking substitute to heart health wonder, it’s earned high acclaim. How does it fare as a way to keep the skin young and healthy, though?

What Is Coconut Oil?

First, some background. As you may have surmised, coconut oil is extracted from the “meat” of the mature nuts. There are two main ways in which this oil is produced.

The first is known as the Dry Process. In this method, manufacturers take the meat from the coconut, then dry it out to create a substance known as Copra.

The copra is then pressed or treated with solvents to produce the oil. A byproduct of this process, a coconut mash, is high in protein and fiber, but unfit for consumption. As a result, it is given to animals as feed.

The second process uses the raw coconut meat as opposed to dry copra. This Wet Process makes use of a combination of extreme temperatures, salts, acids, enzymes, and more create the final oily mixture. The oil can be refined and processed to help it last longer.

Now, you might be wondering why the method of extraction is of any importance. As it turns out, researchers have concluded that there may be health benefits to using virgin coconut oil over dry processed coconut oil.

In a study on rats, they found that VCOs could have a potential advantage over dry processed oil in “maintaining lipid metabolism and antioxidant status.”

As you may already know, antioxidants are compounds that combat so-called “free radicals” within the body. Free radicals can interfere with certain cell functions, and, in abundance, can cause significant cellular damage.

Because of these facts, there is some thought that antioxidants can counteract certain forms of degeneration within the human body and increase lifespan.

Furthermore, there is some evidence to suggest that there is a link between nutrition and skin aging/disease and that certain antioxidants can play a role in protecting overall skin health. Case closed, right?

Not so, as it is important to note that not all antioxidants are created equal. According to the Harvard School Of Public Health:

“Another big misconception is that antioxidants are interchangeable. They aren’t. Each one has unique chemical behaviors and biological properties. They almost certainly evolved as parts of elaborate networks, with each different substance (or family of substances) playing slightly different roles. This means that no single substance can do the work of the whole crowd.”

So, just because one antioxidant has a positive effect on the skin, doesn’t mean that they all will. Moreover, plenty challenge the assumption that antioxidants, on the whole, are good for the body.

The Case Against Coconut Oil

The availability of high-quality research on the effects of coconut oil on the skin is limited. If you were basing your trust in its skin protecting powers on the fact that it contains antioxidants, there is at least some kernel of truth there, as dermatologists agree that antioxidants may have some positive impact on skin health.

They caution, however, that an overabundance of “fragmented nutrients” can actually have a detriment. In other words, processed oils and supplements, devoid of the totality of their organic form, might not be the best medicine.

Also, there are those who believe that antioxidants may have a net adverse effect on skin health. At least one study shows some evidence of antioxidants increasing the rate of skin tumor growth. According to Martin Bergo of Sahlgrenska Academy:

“When the antioxidants attack reactive oxygen radicals in the tumors, a protein called p53 is deactivated. p53 has a neutralizing effect on tumors, and when it’s gone the tumors can grow faster and more aggressively.”

The researchers were careful to point out that this doesn’t mean that people should scrap antioxidants altogether. It’s just that in cases where cancer may be present, antioxidants could worsen the issue. Something they highlight in a follow-up article on the matter.

Even if creams and lotions are deemed to be safer than ingesting coconut oil, if you were looking for an antioxidant boost to help your skin, it turns out that fruits, vegetables, and whole grains might provide a better source of those than even VCO.

The risk of aggravating cancer, though, is only one several lines of criticism against the use of coconut oil. Another major concern is the effect coconut oil may have on fat and cholesterol levels in the body:

Dr Marcela in the video above explains that “half of the fat in coconut oil is lauric acid a medium chain fatty acid with antibacterial, anti-viral and antiprotozoal properties.”

Coconut oil is high in saturated fat, but, the recent fad towards its use has claimed that since it raises HDL (good) cholesterol levels in addition to LDL (bad) cholesterol, it has an overall benefit on heart health in addition to the other supposed advantages for the skin and other parts of the body thanks to its medium-chain fatty acids and medium-chain triglycerides content. Other contents of a cold-pressed coconut oil are caprylic acid, capric acid, lauric acid and more.

There are challenges to this claim, however. Most notably, Dr. Walter C. Willet, M.D., from the Department of Nutrition at the Harvard School for Public Health. In one newsletter, he mentions that:

“Most of the research so far has consisted of short-term studies to examine its effect on cholesterol levels. We don’t really know how coconut oil affects heart disease.”

Dr. Willet goes on to state that for as a cooking oil, at least, he believes there are better alternatives:

“I don’t think coconut oil is as healthful as vegetable oils like olive oil and soybean oil, which are mainly unsaturated fat and therefore both lower LDL and increase HDL. Coconut oil’s special HDL-boosting effect may make it “less bad” than the high saturated fat content would indicate, but it’s still probably not the best choice among the many available oils to reduce the risk of heart disease.”

Furthermore, there’s at least one new study that suggests that HDL might not be as good as was previously believed. An article in Health, published early November 2016, offers a pretty good breakdown of the findings.

The big takeaway, though, is that the link between cholesterol levels and heart disease is more complex than researchers thought it was, and that other factors, such as lifestyle, in addition to cholesterol levels might be a better indicator of heart health.

As for claims that cultures who consume large quantities of coconut products and do not suffer from increased rates of heart disease? It’s true, but detractors are quick to point out that these individuals use the whole coconut, and don’t consume the coconut oil in the way that we might for baking or cooking.

Claims are also rampant that the healthy fatty acids in coconut oil can promote weight loss making it an ideal product for both men’s health and women’s health.

There’s a lot of information showing that ingestion of high levels of coconut oil might not be the best way to go. The claims of organic coconut oil being useful for curing alzheimer’s disease and improving skin health didn’t just appear in a vacuum, though. Could it have some benefit when used on the skin that goes beyond simply having antioxidants?

Coconut Oil As A Topically-Applied Moisturizer

The Dermatology Times reports that there are “surprising” benefits when pure coconut oil is used as a moisturizer. One study, performed by the Department Of Dermatology at Makati Medical Center in the Philippines, tested the efficacy of coconut oil against a skin condition called Xerosis.

Xerosis causes abnormally dry skin, mild to moderate discomfort, and is more common as people become older and less capable of retaining moisture in the skin. According to the researchers, coconut oil could combat these symptoms to the same degree as many mineral oils used to treat Xerosis:

“Coconut oil and mineral oil have comparable effects. Both oils showed effectivity through significant improvement in skin hydration and increase in skin surface lipid levels. Safety was demonstrated through no significant difference in TEWL and skin pH.”

An additional study, performed by the Skin & Cancer Foundation of the Philippines, showed that coconut oil could also have a protective effect against staphylococcal colonization in patients with atopic dermatitis.

The researchers may need to perform further tests to determine the true extent of coconut oil’s abilities, but the initial findings are promising, and suggest that there may be a greater role for the use of VCO in protecting the skin based on its moisturizing and antiseptic properties alone.

There is some concern that coconut oil might pose a risk as an allergen to certain segments of the population. The exact nature of this risk is, however, unknown.

A study from the Department of Dermatology at the University of Minnesota tested patients with a known allergy to a coconut oil derivative, cocamidopropyl betaine (CAPB). Their results?

“Only 3 of the 12 patients with previous reactions to CAPB reacted on retesting, and all of these reactions were doubtful.”

A fractionated coconut oil can be mixed with essential oils such as aloe vera oil, argan oil, tea tree oil for an added anti-inflammatory effects and added boost in health benefits. Not only that they have been reported to solve problems of an acne-prone skin, but it also help avoid hair loss through the nourishment it provides.

Coconut oil might not have all of the mystical properties ascribed to it by die-hard proponents. The debate rages on over whether or not it contributes or detracts for overall heart health.

Even the supposed benefits of coconut oil and its antioxidant capabilities must be called into question, in light of the fact that:

As a possible moisturizer, though, it seems there is great promise for coconut oil. Hopefully, further research on the topic will shed even greater light on its current and and potential coconut oil benefits for overall skin health.